The deadline to implement the FDA’s new nutrition facts labeling law is January 1, 2020, and if you’re a food retailer, that means you have less than six months to make sure your labeling process is ready to roll. It’s been two decades since the last set of nutrition labeling changes, and these new changes, dubbed the Nutrition Facts Law or 2020 Nutrition Label Facts, have been a few years in the making. In fact, even after the new changes were initially approved, implementation was delayed several times due to opposition from consumer groups and retailers, who felt they needed more time to comply. When the final law went into effect in May 2016, the FDA tacked on an additional few years before the new labeling requirements would be fully mandatory in January 2020 for businesses with $10 million or more in annual food sales. Businesses with less than $10 million in annual food revenue have an additional year to make the changes.

Why the change? First of all, a lot has changed since the “old” laws went into effect about 20 years ago. Since then, additional research has provided a more complete understanding of consumers’ nutritional habits and dietary needs, underscoring a need for increased awareness of ingredients that can have an impact on health and wellness. The new law reflects changes based on more recent scientific data, as well as input from public health agencies and consumer groups.

For the most part, the familiar layout of the label will remain the same. Changes were made in the font size to make it easier for consumers to see the calories, serving size and servings per container when applicable. These changes are intended to help consumers make more informed decisions about their eating habits, ideally to enable them to make healthy changes and avoid overconsumption. Importantly, the new guidelines reflect consumers’ actual eating habits with regard to portion size, instead of the “ideal” portion size that formed the basis of the old labeling standards. For instance, while a serving of soda was previously listed as eight ounces, the new labeling lists it as 12 ounces. Likewise, under the old labels, a serving of ice cream was listed as a half cup; the new label increases it to two-thirds of a cup to reflect average consumption habits. Since some smaller packages may contain more than a single serving, certain products will require double columns on their labels that reflect nutritional data for both the package size and the actual serving size. The footnote at the end of the label is also changing to provide clearer information about how daily values are determined. 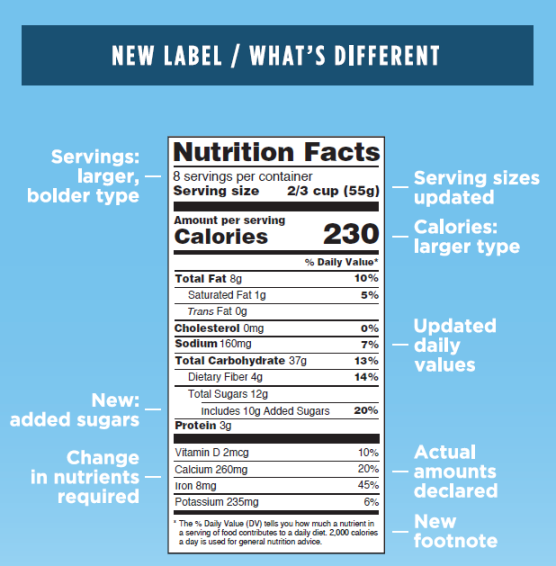 You can see a side-by-side comparison of the old and new label designs on the FDA website.

The new nutritional labeling law follows on the heels of the menu labeling law that went into effect last spring. Under that law, restaurants and retail food establishments must list calorie content and nutritional information on grab and go food labels and for foods on display, as well as on menus and menu boards.

By including updated nutritional data, the new labeling law is aimed at helping consumers make wiser and more informed food choices. For food vendors, it means additional work and effort to make sure the foods they offer have labels that meet these regulations. Failure to meet the January deadline can mean fines and other penalties, resulting in a loss of revenue and an interruption of your business operations.

Depending on the number of varieties of food products your establishment sells, the task of updating labels – without errors or omissions – can certainly seem overwhelming. Fortunately, if you currently use ADC’s FreshIQ™ platform there’s no need to worry. ADC’s most recent software update to 6.54 includes all the new labeling requirements, so your business can continue to operate without a hitch – and without fear of being out of compliance with the new law.